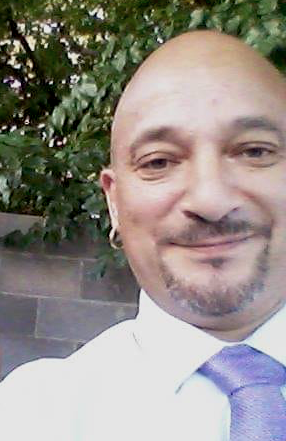 Farid Orlemans Mbirik Huisman, 53, of Albuquerque, New Mexico, USA, passed away on January 15, 2022. Although fully vaccinated, he made his Heavenly transition after a short but courageous battle with Covid-19.

Farid was born on October 31, 1968, in Amsterdam, Netherlands to Wilhelmina Jacoba Maria Orlemans (Dutch) and Lasse Mbirik (Moroccan), a boxer who, according to family lore, was a sparring partner of Muhammad Ali. His mother went into a coma after a tragic accident in 1971 from which she never recovered, and his father returned to Morocco, leaving his 3-year-old toddler behind. Farid was then raised by his grandparents until he was five, when they put him up for adoption. His half-sister Sandra de Jong was sent to live with an aunt and uncle in Beverwijk, but eventually went to live with her father Piet de Jong. After five years in a Gouderak orphanage, 10-year-old Farid was first fostered then adopted by Bert and Ada Huisman who, along with their son Arnoud, provided him with a comfortable and travel-filled life until he spread his wings at 18. He maintained a lifelong relationship with them afterward, especially his father Bert. After his adoption, Farid was reunited with his beloved sister Sandra and they remained devoted to one another, vacationing and spending as much time as possible together until he moved to Albuquerque, New Mexico, USA.

A talented athlete and Junior Olympian, he competed in both gymnastics and soccer. After graduating from Professor Gunnick High School in Rotterdam, Holland in 1986, he went on to study at Erasmus University also in Rotterdam. After graduation, he trained as a chef, which would serve him well after relocating to New Mexico, where he would go on to be a private chef and caterer for various events. But more importantly – and as anyone that knew him would tell you - he LOVED whipping up delicious meals for his family and friends!

An expert cannabis grower in Rotterdam from 1990-2004, Farid won regional grower awards and later co-owned The Medicinal Herb Company in Albuquerque from May 2008-October 2014. He was also a gentle, nurturing spirit who excelled as a truly loving and professional caregiver to his private clients.

In 2005 he married Amani Malaika and together they had a son, Tenzin Maya Malaika Huisman. Although the couple would eventually divorce, they maintained a loving friendship, focusing their attention on co-parenting their beloved only child, to whom Farid was absolutely devoted and adored. Nothing made him prouder than attending and supporting his budding actor Tenzin’s theatrical plays, especially given that Tenzin was usually the star!

Farid was very involved in the African-American theater community in Albuquerque and served as sound and/or stage crew for many plays, including several productions of the annual ‘Roots Revival’ and ‘The Wiz’, both produced by the New Mexico Black History Organizing Committee, and ‘Black Music Through the Ages: 1869-1969’, produced by his girlfriend Tracey Whitney at the African American Performing Arts Center.

With spiritual beliefs deeply rooted in Buddhism, Far was a long-time congregant of both the Albuquerque Center for Spiritual Living and the One Spiritual Center. He especially loved long walks in the beautiful Sandia mountains with Tenzin (along with he and Tracey’s two dogs Bandit and Marley) and connecting with Spirit in nature.

Far loved music! His tastes ran the gamut of Reggae, Jazz, Blues and Rock (some of his favorite artists were Prince, Miles Davis, Bob Marley, Gregory Porter, John Mayer and Sting), and he became a fixture in the Albuquerque music community, eventually becoming a percussionist with Tracey’s jazz band, performing with her in many concerts including: St. Johns College ‘Music On the Hill’, Summertime in Old Town (in the historic Gazebo), the Route 66 Summerfest, the Albuquerque Museum Summer Series, as well as regular gigs at the Hotel Andaluz, etc. He would also sit in with other local bands or at jam sessions.

Farid rejoins his beloved mother Wilhelmina in the Heavens. His father’s life status is unknown. He is survived by his son Tenzin and mother Amani, his long-time love Tracey, his sister Sandra and her daughter Emma, and his adopted family of Bert, Ada and Arnoud. Farid never met a stranger! He leaves behind a community of friends from Albuquerque to Amsterdam to Rotterdam and beyond. Rust In Vrede, Beloved Far.

A Celebration of Life will be held at the Albuquerque Center for Spiritual Living, located at 2801 Louisiana Blvd. NE, Albuquerque, NM 87110, on March 26, 2022 at

To send flowers to the family or plant a tree in memory of Farid Huisman, please visit Tribute Store