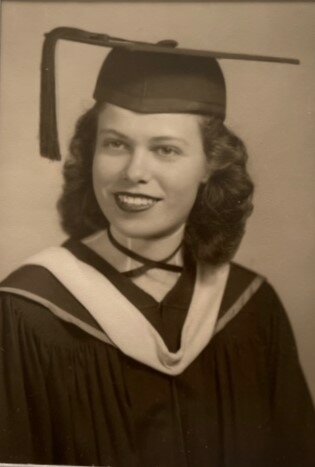 Janet was born to Daniel and Irene McGanney in San Mateo, California on May 17, 1927. She spent her happy childhood there and attended high school at Notre Dame Belmont. The family relocated to Chicago because of Daniel's work with Southern Pacific Railroad. Janet earned a degree in Math at Trinity College in Washington D.C. She then returned to Chicago and worked in the Merchandise Mart until she married the love of her life, Frank A. Lederle Jr. Together they raised six children and lived in Chicago, San Mateo, Phoenix and finally settling in Albuquerque these last 55 years.

Janet was a woman of strong faith in the Lord. She enjoyed attending mass and also praying at home. She had great fortitude and was never one to complain, putting her trust in God.

Besides taking care of her family, Janet loved volunteering and gave much of her time to St. Joesph's Hospital, Casa Angelica, Telecare, which supported seniors and shut-ins with friendly phone calls, and Our Lady of Annunciation Parish. Often serving in a board position.

Janet loved to play tennis, travel and was quite the Bridge player. She had many friends and enjoyed socializing. She was known for her smile and laughter.

A memorial mass will be held at Our Lady of Annunciation Parish Church on July 22 at 10:00 a.m.

The family suggest that in lieu of flowers donations be made to Casa Angelica,5629 Isleta Blvd SW, Albuquerque NM.

To send flowers to the family or plant a tree in memory of Janet Lederle , please visit Tribute Store
Print
Friday
22
July

Our Lady of Annunciation Parish Church