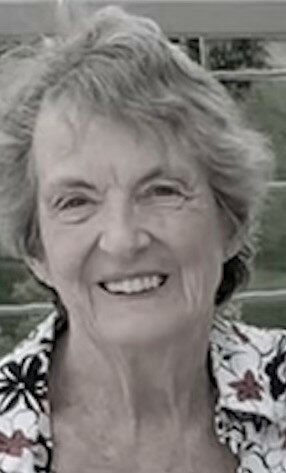 Mary Herman passed peacefully during the early hours of March 5th, surrounded by those she loved.  Born Mary Josephine Byrnes, in Brooklyn, New York, at age 3 her family moved to the beautiful & idyllic small town of Mountain Lakes, New Jersey, which was forever imprinted on her heart and soul.

Upon graduation in 1953 from Mountain Lakes High School, she spent two eye-opening and informative years attending Duquesne University, in Pittsburg, PA, enjoying the historical times of the Duquesne Basketball team, who broke racial barriers by being the first university to enroll African American students, and who were featured on the Ed Sullivan Show. Her perspectives on race, religion, class, culture and the human condition were fine-tuned during this influential time, and she brought her all-inclusive style of love and kindness with her wherever she went.  She returned to Mountain Lakes, getting a secretarial job in New York City after graduating from the renowned secretarial school, Katharine Gibbs college, excelling in short-hand and typing.

On a lark, with a friend, she left the east coast and drove across country to live in San Francisco, CA and became a secretary for ASCAP in San Francisco, CA. After a short time, she became a stewardess with Bonanza Airlines, based in Phoenix. She routinely took the longest route, flying 12 hours in a day, touching down in cities small and large, including Los Angeles, Las Vegas, Salt Lake City, Kingman, Prescott and every small town in between, in an DC-3... without air conditioning.  In 1959 she met the love of her life, Milton J. Herman, Jr., a jet fighter pilot in the USAF, stationed at Luke Air Force Base. After a year-long engagement secured by Milt’s West Point ring while he was deployed to Korea, they were married at St Catherine of Sienna Catholic Church, in Mountain Lakes, NJ. They were the first couple to be married there.

After a blissful honeymoon in Bermuda, they settled into military life in Glendale, AZ, and had two daughters. Upon reassignment to Kirtland Air Force Base in 1969, Mary took an active role in raising her children, and many others, related or not, that came into her purview.  She was actively involved in her girl’s lives, as well as many of their friends.

Her sewing and upholstery talents touched many, and were visible at proms, homecomings, first communions, weddings and living rooms across several states.  She was highly inventive in creating Halloween costumes, draperies, tackling difficult projects (some out of thin air, without a pattern) and of course making the hundreds of cheerleading and drill team uniforms for dozens of girls at Holy Ghost and at St. Pius X, from 1976 to 1982 and beyond, enjoying every minute and creating lasting bonds that remain to this day.

Mary was the consummate hostess, welcoming wayward military guys, friends and family into her home, without a moment’s hesitation. She instigated and reveled in every minute of her family’s life from the military, to hot air ballooning in the early days of the Balloon Fiesta, Hobie Cat sailing excursions and just hanging out and playing cards, especially Bridge and Yertz.  She was a voice of reason, a sounding board and a source of love and support for so many, playing the role of “mom” to far more than she ever gave birth to.

She worked for several years at The New England investment group, delivered Meals on Wheels for 15+ years, and spent her days volunteering and helping friends, neighbors and family.  She relished becoming a grandmother and enjoyed years of tea parties, doll houses, card games, green chile dip, school & sporting events and family get togethers.

She is survived by her loving husband of 60 years, Milton J. Herman, Jr., her daughter Cathy Herman Harrel, son in law John Harrel, grandchildren Alexandra, Joe, Danielle and Maggie, and her daughter Michelle and grandchild Winston, and numerous nieces and nephews who she loved dearly, and they, her.

Heartfelt appreciation goes out to the incredible support team of her beloved niece Kristin Herman Cram, wonderful life-long neighbors and friends, and our real life ‘Visiting Angel’ Katy Herman Mulberry. Thanks also to Kerry Brennan Bertram and the entire team at Stride, Inc., all of whom provided unending love, comfort and conversations, right up to the end.

Funeral services will be held at the Aquinas Newman Center, on the UNM Campus, Wednesday, May 4th, 2022. Rosary begins at 10:30, funeral mass to follow. Internment at Santa Fe National Cemetery at 3pm, with an Open House Reception from 5 pm until 10 pm.

To send flowers to the family or plant a tree in memory of Mary Herman, please visit Tribute Store
Wednesday
4
May