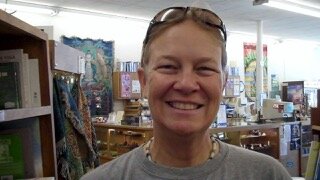 Kimberly Ann Wallace, 57, of Aztec, NM, passed away on May 26, 2022, at Bear Canyon Rehabilitation Center in Albuquerque, NM, following a short battle with brain cancer.

Kimberly was born on September 1, 1964, to John R. Wallace and Catherine A. Hanna Moulder in Las Cruces NM.

Kimberly grew up in Las Cruces, graduating from Las Cruces High School in 1982. She spent her early years living with family in the Canary Islands and Italy. After graduation, Kimberly entered the U.S. Army where she was able to travel the world making many friends whom she continued to be in contact with. After leaving the Army, following the Persian Gulf War, Kim moved to Keene, NH, where she found working for the library a wonderful experience. Kim eventually made her way to Austin, TX where she worked for over 14 years at the University of Texas in the Graduate Library. She made countless, long lasting friendships while there, specifically, as she called him, “Her brother from another mother” Dan Normand and his wife Sarah. After leaving UT Kim moved to Aztec to be closer to her sister Joyce. Kim began working on the Foster Farms in Aztec, NM, where she enjoyed doing everyday farm work but most specially, working with and seeing the animals everyday. Kim loved birds and sunflowers. She had an amazing collection of sunflowers growing around her home mixed with bird feeders. You could always be assured she had a bird book nearby.

Kimberly was preceded in death by her father and recently her mother Catherine. She is survived by her sisters Linda Nelson and husband, Dan; Joyce LaMeire; her nieces Cori Donez and husband, Ron; and Leah; nephews Richard and wife, Sierra; and Zander; as well as grand-nephews; Tony, Lorenzo, Jakob, and Titan, and Grand-nieces Arria, and Tenley. She is also survived by her Uncle James Hanna, and Aunt Laura Wright and husband, Craig; and many cousins and friends. Kimberly was one of the sweetest and gentlest souls an individual could have known and her loss will be felt by many family and friends. Special thank you to Hospice of NM for taking care of Kim during her final days.

A Celebration of Life Service will be held for both Kimberly and her mother Catherine, at 10:30 am on June 17th, at the Zuhl Museum; 775 College Drive, New Mexico State University.

To send flowers to the family or plant a tree in memory of Kimberly Wallace , please visit Tribute Store

Share Your Memory of
Kimberly
Upload Your Memory View All Memories
Be the first to upload a memory!
Share A Memory
Send Flowers
Plant a Tree