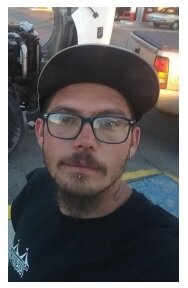 Jesse Allen Sanford, 37, of Albuquerque New Mexico, passed away unexpectedly on Friday, July 22nd 2022. He changed the world when he was born into it on July 9th, 1985 in Farmington, New Mexico.

Jesse enjoyed hunting, riding his Harley and working on cars. He had a brilliant mind and could fix anything – just like our dad. He was a free spirit that enjoyed the simple things in life. Nothing meant more to him than his son Jesse Jr., bonus daughter Anjelee, his niece Blakely and nephews Griffen, Kemper and Connor – they were his world.

There will be a private gathering of his close family and friends at a later date. To honor his memory, make peace with your past. Re-examine relationships; repair the broken ones. Love the people in your life today, for life is too short and too beautiful not to.

To send flowers to the family or plant a tree in memory of Jesse Sanford, please visit Tribute Store

Share Your Memory of
Jesse
Upload Your Memory View All Memories
Be the first to upload a memory!
Share A Memory
Send Flowers
Plant a Tree