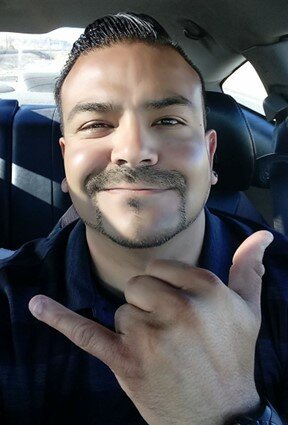 He was born in Las Vegas, NM on November 11, 1977, to Adelio “Dale” and Martha Bustamante. Dion was blessed with 2 handsome strong boys, Antonio and Daniel. A lifelong Catholic, he was a member of the Immaculate Conception Catholic Church in Las Vegas, NM. Dion graduated from high school in 1996. Dion’s passion in life was to work with the intellectually disabled and the handicapped. Dion enjoyed his 27+ year career ensuring that the people he served had a voice, were able to live long fulfilling lives, and that each one was treated with the respect and the exceptional care they deserved. Dion was well known around the town of Las Vegas as everyone had a story or two of him driving around in his famous Blue Dodge Neon.

He is preceded in death by his grandparents Carlos and Grucella Gallegos, Abel and Frances Bustamante, Uncle Abel Bustamante Jr., and Aunt Patsy Bustamante.

He is survived by his son’s Antonio Bustamante (Bailey Douglass) and Daniel Bustamante of Las Vegas. His parents Adelio “Dale” and Martha Bustamante of Las Vegas. His brother’s Adelio “D ale” Bustamante Jr. (Phyllis Duran) of Watrous, David (Teresa) Bustamante of Albuquerque, Carlos (Dawn) Bustamante of Albuquerque and Mark Bustamante of Las Vegas. His “God Son” and “special nephew”, Marko Bustamante. His companion, Amie Baca, family and Mila whom he called his “hita”. The mother of his sons, Marla Martinez and all her family. He was a blessed uncle to eleven nephews and two nieces who loved him dearly. His “Nino” Uncle Albert Bustamante, Uncle Phil (Vangie) Bustamante, Uncle Arthur (Lillian) Bustamante, Aunt Veronica (Abel, deceased) Bustamante and Andrew Jiron, whom he called his “other” brother. He will be missed by other relatives and the many friends he made throughout his life. Dion became his family’s hero as an organ donor. He provided the gift of life to countless people throughout the US by donating his corneas, his kidneys, valves from his heart and provided tissue donations that will save the lives of many more. This was in line with Dion’s character as many families and friends described him as the person to give you his shirt off his back at any point and time.

Rosary devotional services will be conducted by Carla O’Neil at 9:00am, Saturday, September 3rd. Father George Salazar will conduct his Funeral Mass to follow at 9:30 am at the Immaculate Conception Church in Las Vegas, NM. Cremation has taken place and burial of his cremains will take place at a later date at Mount Calvary Cemetery in Las Vegas.

Dion’s honorary pallbearers will be all his nephews, nieces and his “hita” Mila.

In lieu of flowers the family asks that you register to become an organ donor and if you wish, a donation in Dion’s name and memory may be made to the New Mexico Donor Services or to the Special Olympics of New Mexico.

To send flowers to the family or plant a tree in memory of Dion Bustamante, please visit Tribute Store

Share Your Memory of
Dion
Upload Your Memory View All Memories
Be the first to upload a memory!
Share A Memory
Send Flowers
Plant a Tree