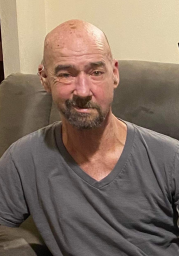 We are sad to announce the passing of George McGinty. George was born on January 31, 1959 to Sandy Kelsey and Al Desrosiers. He was born in Freeport, Texas at the hospital where his Grandmother worked as a nurse. Even as a small child George shined with his witty personality and sense of humor. When Sandy married Mearl McGinty he adopted George and his younger sister Jamie and they moved to Alvin, Texas. Both Sandy and Mearl possessed a great sense of humor, it set the stage for George to become a true comedian. The stories that come from his childhood have his family still laughing.

George was the oldest of 7. Jamie King, Lori Palmer (Dave), Peggy McGinty (Kelly), Michael McGinty, Matthew McGinty, Mark McGinty and 2 step brothers David McGinty (Kelly) and Dennis McGinty (Alisha) from Mearl’s previous marriage. As in all large families, the older children helped out with the younger children. That is where his kindness and compassion for others developed. George had a great love for his siblings.

When George became a young man he was able to work with his father, eager to learn Mearl taught him a little about everything about being a man and how to work hard. While Sandy taught him how to keep it real, to dance and live life to the fullest. George played football in high school but his true love was baseball. He graduated from Alvin High School in 1977. He then became a volunteer firefighter while working as a draftsman. George came from a musically inclined family which he passed on to his own children. With his love for music he learned to play the bass/guitar. George and his sons put together a band and would play for the family. Later in his adult years he fell in love with all things NASCAR and had quite a collection. He was able to attend races with his friends. His favorite driver being Jimmy Johnson.

In 1981 George met Judy Arms and after a whirlwind courtship they were married. Shortly after their first child was born they moved to Albuquerque, New Mexico. Being close to her 5 brothers and sisters along with their spouses which gave him comfort being so far from home. George supported the family by becoming a fuel truck driver. Although he was home everyday, he often worked oddly long hours but they made it work. Together they raised 5children; Jordan Snyder (Lawne), Joshua McGinty (Stephanie), Brian McGinty (Jessica), Benjamin McGinty (Gabi), Emily Wright (Cameron). He was over the moon with pride, of all of them and they gave him plenty of reasons to be. George would often brag he had 2 teachers and 2 preachers.

In 2001 George married Jackie Sears Arms. She had 3 children from a previous marriage, Jeff Arms, Jennifer Prue and Jessica Arms. Before marrying they agreed to never refer to the children as his and hers but simply the kids and that was exactly how it was; yet there was still plenty of parenting to be done. Much of their life together was spent laughing, joking and enjoying each other’s company. George and Jackie would travel with her sister Loretta(Lonnie) and her late husband Randy. George and Randy became close friends and would often disappear making it a hunt for the men in hope they didn’t do anything stupid. They never made life boring as they were the comedians of the family. George was overjoyed when he learned his wife had another sister Debbie. Most everyday they spent their time praying together - thanking the Lord for their family and for another day together. It seemed as though they never stopped talking and dreaming about the future together. George promised that when he got better they would dance together again and travel. Even in the end he never gave up hope.

Over the years George and his wife were overjoyed to welcome into the world 15 grandchildren; Hannah, Jeremy, Alexia, Jonah, Zachary, Elijah, Aubree, Ryleigh, Patrick, Ariel, Zoey, Penny, Adriana, Joshua and Allison. He was simply known as Pop, not just tothe grandchildren but to all the children who were part of his life (and there were many of them). Pop was also the man of many answers when it came to math and advice. Pop was always willing to listen to anything the grandchildren had to say, no matter the conversation he always made time. Pop was one of those people that would show pictures on his phone to strangers and tell about their many accomplishments. He was always so proud of all the grandchildren. He saved everything they ever gave him, even if it was a card they signed. He saved it.

Sadly over the years George’s health began to fail. He hated that he was missing more and more family functions like birthday parties, Thanksgiving, Christmas and Easter gatherings and attending church. He talked of it often, marking it as one of the worse things in his life. He missed being with his family. Jackie promised him he would remain at home when his time came and he was until his last moments. George went to meet his Lord and Savior on August 12, 2022.

George wore many hats Son, Brother, Husband, Father, Pop, Uncle and Friend. He wore each hat with pride. He loved his family so much and with the family growing so large so was George’s heart.

George was preceded in death by his son Joshua McGinty, his father Mearl McGinty, maternal grandparents Janice and George Williamson who were a very big part of his life,paternal grandparents Thomas L and Maude McGinty , his mother and father in law Euel and Lorine Arms (Judy’s parents) and Jack and JoAnne Sears (Jackie’s parents) he was very close to all of them and loved them with his whole heart.

George’s family would like to thank all of the wonderful doctors and nurses at UNM Hospital who went above and beyond to care for him. And to all of the staff and patients of DeVitaDialysis who touched his life and became extended family to him.

A service and celebration of George’s life will be held on Saturday, September 24, 2022at the American Legion Post 49 at 11005 Central Ave NE Albuquerque, New Mexico 87123at 3:00 pm with Pastor Steve Stucker officiating and arrangements being handled by RiversideFuneral Home. A special and huge thank you to Jazmarie Wisor (Funeral Director).

To send flowers to the family or plant a tree in memory of George McGinty, please visit Tribute Store

Share Your Memory of
George
Upload Your Memory View All Memories
Be the first to upload a memory!
Share A Memory
Send Flowers
Plant a Tree