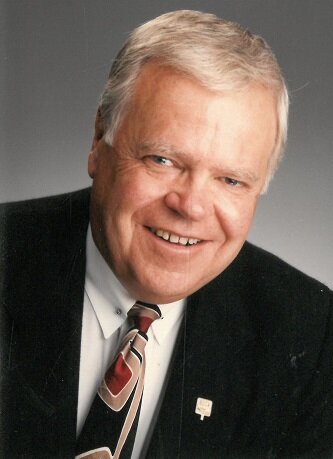 He was a graduate of Kalispell High School in Montana and entered the US Navy after graduation, where he served as a Corpsman during the Korean War.   After the Navy, Gerry moved to Albuquerque, where he graduated from the University of New Mexico and began a career with Mountain Bell and AT&T in Las Cruces, Denver, Phoenix, and NYC.  He returned to Albuquerque in 1978 and began a long and successful career in real estate.

Gerry found the love of his life, Kathleen (Kay), and they were married in Kauai, Hawaii in 1983.  They owned and operated RECA/Better Homes and Gardens before he retired in 2000.

Gerry is survived by his loving wife, Kathleen (Kay); his sister, Dianne Hern; his children, Mark Olson (Denise), Glen Olson (Melynda), Alene Olson, Maureen Koerber (Jim), Michael Vihstadt, and Mark Vihstadt (Heather); by his grandchildren who brought so much joy to his life, Dustin Olson (Barbara), Carleigh Olson (Sean), Taylor Olson (Vannessa), Peri Ann Olson, Shayna Krajewski (Adam), Thomas Gonzalez, Timothy Gonzalez, Tessa Gonzalez, Evan Vihstadt, Mason Vihstadt, Nolan Vihstadt, Nick Koerber (Kaitlyn), Kyla Koerber (Michael), Zach Cox (Lauren), and Desiree Cox; 11 great grandchildren; and many nieces and nephews who he adored.  He was so proud of all his children and grandchildren and loved them dearly.  His life revolved around them, and he participated in their many activities.  They were truly the sunshine in his days.  He is also missed by his precious pup, Loki.

In addition to his parents, he was preceded in death by his sister, Bonita, and her husband, Lee Torgrimson, and infant brother, Gene.

Gerry had a fun loving and adventurous spirit—whether he was boating, skiing, hiking, camping, fishing, playing racquet sports or golfing — activities he also shared with his children and grandchildren — or driving his Porsche (perhaps a little too fast).  A major highlight of his life was the opportunity to play golf with Arnold Palmer on numerous occasions and to play the Old Course at St. Andrews, where he sunk a 30-foot putt on the 18th hole!  He was also able to attend the Masters and play Pebble Beach on several occasions.  Another highlight was a weeklong sailing trip in the BVI’s with his buddies, Tom and Tom.  He appreciated the finer things in life such as art, travel, and wine, but he was perfectly content with a good book and a comfortable place to sit.  He was an avid football fan who enjoyed friendly wagers in support of his favorite teams.  He was a phenomenal cook and bartender (who thankfully shared his delectable recipes - the most requested being his famous green chile stew, homemade salsa, and margaritas).

It is especially noteworthy that Gerry was a man of honor who not only faithfully served his country, but even helped construct the Hungry Horse Dam in Montana as a young adult—no small feat.  Gerry was a man of quiet confidence and humility.  He led by example, and he loved deeply and whole heartedly.  He was well informed and able to see multiple sides of an issue—a rare trait today.  He possessed great wisdom, yet only offered advice when asked.  How he made you feel was a true testament to the person he was.  Gerry was genuinely interested in others, providing his undivided attention and a listening ear.  His words were uplifting and filled with encouragement and praise.  He was authentic, accepting, and tolerant.  He built, nurtured, and treasured lifelong friendships.

He delighted in Kay.  His happiest times were traveling with her throughout the US, Mexico, Canada, and Europe.  They visited over 19 countries.   Together they modeled what marriage could be—demonstrating mutual respect, adoration, and affection.

In recent years as Gerry faced adversity with health and mobility challenges, his ability to exude positivity was amazing.  He constantly had a smile on his face, a laugh to share, and an appreciative attitude.  Due to the loving care of Annette, his devoted caregiver, he continued to enjoy life daily.  Annette and her family were an integral part of ours and we are eternally grateful to her.  Gerry was also cared for recently by Heartland Hospice.  Their care added joy to his days.

Gerry was an inspiration to us, and we will be forever thankful for his presence in our lives.

Share Your Memory of
Gerald
Upload Your Memory View All Memories
Be the first to upload a memory!
Share A Memory