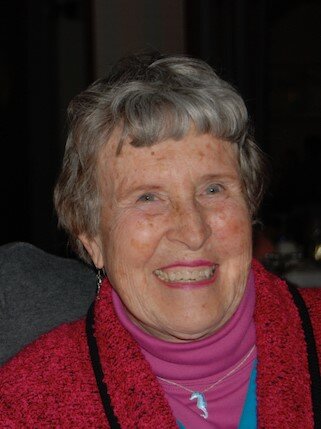 Louise Milyko passed away peacefully from natural causes at the age of 93 on October 8, 2022. She was born in Mt. Vernon, NY and raised in Florida, where she grew up loving every type of animal, from the usual fur babies to creepy crawlies.

As a teenager she worked at a children’s camp as a swimming lifeguard and teaching horseback riding. She spent her last two years of high school as a boarder at Friends Academy, a private Quaker school on Long Island, NY. Her high school sweetheart, classmate Alex Milyko, became the love of her life. They married in 1952 after she had finished a 5-year nursing degree from Vanderbilt University and he had finished his first year of medical school. Their early years as a married couple took them from New York City to Cooperstown, NY to Otis Air Force Base on Cape Cod as Alex finished his medical training, eventually settling in West Hartford, CT in 1960 where Alex established a private practice of family medicine. At the birth of their first child in 1954, Louise left behind her nursing job to become a stay-at-home parent, raising four children. As the children entered their teen years, Louise took her long-standing love of animals into a new career path, becoming well known in the community as “The Snake Lady,” giving educational programs at schools and libraries, as well as snake-themed children’s birthday parties. After becoming empty nesters, Louise and Alex moved to Albuquerque, NM in 1981, where Alex joined the Lovelace Medical Center. Louise loved going horseback riding in the Sandias, worked on her growing skills as a hobby photographer, enthusiastically joined hot air balloon crews, and served as a volunteer zoo docent at the Albuquerque BioPark.

Once Alex retired, they bought a motorhome and spent at least as much time out on the road as at home, exploring all over the U.S. and Canada. Whenever they were home, they enjoyed square dancing. They celebrated their 50th wedding anniversary in 2002, but just a few months later Alex died from heart disease. In her 20 years as a widow, Louise traded RV travel for exploring the country by train, and was comforted by having the company of her eldest son living with her before his unexpected death in 2020. Like many people of her era who were raised during the worst years of the Great Depression, Louise was always extremely thrifty and cost-conscious, yet she was also often extraordinarily generous in her philanthropy and in her personal relationships.