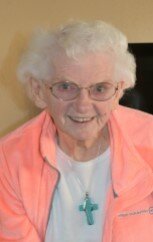 STRONG, LAWANDA, age 91, died peacefully in her sleep on Tuesday, October 11, 2022. Born in Franklin, Pennsylvania, she married Walter Webb when she was 17, and in 1955 they moved with their three young children to Albuquerque, New Mexico. Lawanda and Walt divorced in 1963, and she married Jim Strong in 1965. They moved to Ruidoso, New Mexico, where they operated a plumbing & heating business for many years. Lawanda was very active in the Ruidoso Benevolent Patriotic Order of Does.

Lawanda and Jim divorced in 1974, and in the early 1980’s she moved back to Albuquerque. Lawanda worked in banking for many years, and retired in 2002. She found a new purpose in life at the Manzano Mesa Multigenerational Center where she volunteered for more than 18 years. In 2008 she was named Albuquerque Volunteer of the Year and honored at a banquet by then Albuquerque Mayor Martin Chavez. “Miss Lawanda,” as she was called by her students, was always ready with a smile and greeting.

When the Coronavirus forced the closure of the Multigenerational Center, Lawanda began sewing fleece blankets at home to donate to the Animal Humane Society in Albuquerque. She also made blankets for a Foster Child Program, and for the Homeless Centers.

In lieu of flowers, and in respect for Lawanda’s deep and abiding love of animals, the family requests donations to your local Animal Humane Society.