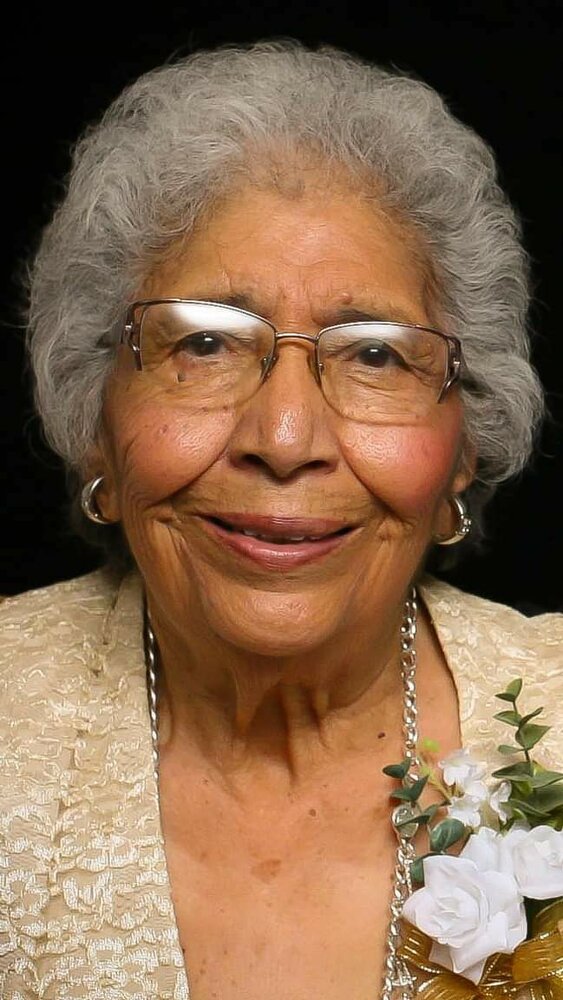 Eulogia “Ola” (Martinez) Hoffman, 92, returned home to her Lord and Savior on Sunday, October 30, 2022. Ola was born July 18, 1930, in Moses, NM to Antonio and Isaria (Santistevan) Martinez. She relished her blessed life and she in turn enriched the lives of all who met her. Ola was baptized in the distinctive stone church in Moses which was built in 1910 by her grandfather Ricardo Santistevan. Years later her widowed mother moved their family to Clayton, NM after the tragic death of Ola’s father Antonio. In Clayton, Ola flourished in her primary schooling and later, after high school graduation, entered training to become a nun. She became ill during her novitiate term and had to leave the order. After her recovery she returned to work shuttling the nuns of her former order to and from Amarillo, TX. During one such trip she met and began corresponding with John Walter Hoffman, a young Air Force sergeant from Shelton, WA, on duty near Amarillo. Ola and John were married in Clayton six months later, on December 29, 1956. They were happily married for 64 years and during their fulfilling life together, they traveled throughout the United States including Alaska and Hawaii; through Canada and Mexico; and across several countries in Western Europe. The highlight of their travels in Europe was a visit to Rome, Italy and an audience with Pope John XXIII in Vatican City. Along with John, Ola was a founding member of St. Jude Thaddeus Catholic Parish participating in its growth from a mission church of the Archdiocese of Santa Fe in the early 1970s to its current status as one of the larger parishes in the Albuquerque Metropolitan area. She served as a volunteer religious education teacher; sang in the church choir; was continually active in parish life activities; and was a devoted member of the Legion of Mary. Ola enjoyed fishing, camping, and watching sports especially high school and college basketball as well as the pro football Dallas Cowboys. She was an avid league bowler; enjoyed watching classic movies on TV; and especially loved spending time with John and the family in their mountain retreat near Angel Fire, NM. Ola was preceded in death by her father Antonio Martinez; her stepfather Frank “Poncho” Olivas; her mother Isaria Martinez Olivas; her brothers Tony Martinez and Jose’ Dulcineo Martinez; and her beloved husband John who died on August 2, 2021. Ola is survived by her older sister Crucita (Martinez) Simpson in Albuquerque and her younger brothers Ricardo Martinez and Ronald K. Olivas, both living in Albuquerque. Moreover, Ola is survived by her son Michael (Peggy) Hoffman and family in Bellevue, NE; her daughter Frances (Patrick) McCachren and family in Rio Rancho, NM; her son Joseph (Mona) Hoffman and family in Albuquerque; her daughter Majella (Larry) Steckel in Zephyrhills, FL; her son Anthony (Jennifer) Hoffman and family in Arlington, VA; her son John (Barbara) Hoffman and family in Sun Lakes, AZ; and her 17 grandchildren and 11 great-grandchildren, as well as many loving nieces, nephews, cousins, and numerous other relatives. Funeral arrangements are being made with Riverside Funeral Home of Albuquerque, and interment will be at Gate of Heaven Catholic Cemetery, 7999 Wyoming Blvd NE, Albuquerque, NM 87109. Details for the Funeral Mass at St. Jude Thaddeus Parish, the Graveside service, and the reception afterwards will be posted on the Riverside Funeral Home web page https://riversidefunerals.com/tribute/all-services/index.html. The Funeral Mass will be available via live stream video at https://www.stjudenm.org/. In lieu of flowers the family requests memorial donations be made via mail to the St. Jude Children's Research Hospital, 501 St. Jude Place, Memphis, TN 38105 or on-line at https://www.stjude.org/donate/donate-to-st-jude.html?sc_icid=wtg-lz-donatenow.

To send flowers to the family or plant a tree in memory of Eulogia Hoffman , please visit Tribute Store
Monday
14
November

Share Your Memory of
Eulogia
Upload Your Memory View All Memories
Be the first to upload a memory!
Share A Memory
Send Flowers
Plant a Tree