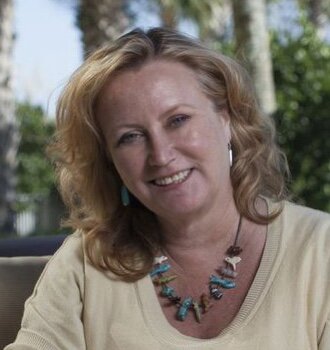 Julie Rene’ Ortolon was born in to this world on August 5, 1959 in Dallas, Texas. Julie was the beloved daughter of Paul and Bernice Parker and youngest sibling to David, Eileen, and Annette. Shortly after her birth, the family relocated to Colorado where Julie spent the first seven years of her life building campfires and exploring the majesty of the Rocky Mountains. With her siblings and imaginary puppy always by her side, Julie’s love for the outdoors and animals was born.

In 1967, the family returned to Texas where Julie spent her school age years in the family home located on Pollyanna Street in Austin. You could often find Julie catching fireflies in the backyard and taking English horse riding lessons. During these years, she began to capture the beauty of the horses she loved with pen and paper and an artist was born.

After high school, Julie attended Schreiner University in Kerrville, Texas. On November 10, 1983 she met the love of her life Ken Ortolon at a local art gallery where she worked. After their first date at a University of Texas football game they both knew they had “found the one”. On June 3, 1984, just seven months after they met, Julie and Ken were married aboard the Flagship Texas on Lake Travis.

After living in Austin as an artist and owning her own business, Ken and Julie moved outside the city to Lakeway. Julie’s creative mind always led her to want to tell stories but her struggle with dyslexia made this a challenge. One day Ken brought home a computer for a part-time business he was starting. When Julie realized the computer had spell check, she commandeered it and knew she could finally put her stories into written form. She quickly memorized where the letters were placed on the keyboard. As Julie began to type, her words came to life and a writer was born. Julie’s writing career quickly began to unfold as her first book, Drive Me Wild, was published in 2001 and soon landed her on the USA Today Bestseller List. Julie published nine more books that were distributed nationwide and internationally. Julie was well respected among her writing peers, won numerous writing awards and served as President of Novelist Inc., as well as the Austin and San Antonio chapters of Romance Writers of America.

In 2006, Ken and Julie became part-time residents of Santa Fe, New Mexico. With their love for the Southwest, local art and the outdoors they eventually made Santa Fe their home. Over the last 15 years Julie immersed herself in the culture of the town she loved so much, made life long friends and even became a docent at the historic La Fonda Hotel.

Julie lived her life as an artist and the world was her canvas. Everything she did was an expression of herself, especially the way she loved her family. Julie’s heart and home were always open, especially to her nieces and nephews she loved as her very own. The faint smell of Thanksgiving, another sunrise over the Texas ranch lands, the taste of fresh dewberry cobbler and the sound of six strings playing through the night will always remind us of how blessed we were to experience this adventurous life by her side.

Memorial contributions may be made to Santa Fe Animal Shelter and Humane Society, or Schreiner University Learning Support Services Program.

To send flowers to the family or plant a tree in memory of Julie Ortolon, please visit Tribute Store