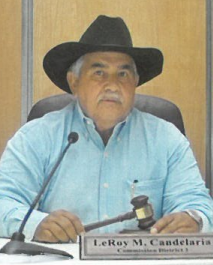 Leroy M. Candelaria age 73, Passed away on December 22, 2022. Leroy was born June 28, 1949 to Martin and Antonia Candelaria. He is survived by the love of his life Concepcion “Concha” Chavez Candelaria and many family members. He is preceded in death by his parents Martin Candelaria and Antonia Gutirrez a brother Porfirio Candelaria.

Leroy graduated from Mountainair High School in 1968 and thereafter joined the U.S. Army, where he served in Vietnam. Leroy also served in the Army Reserves 387th Combat Engineers. In 2000 Leroy retired from the NM Department of Transportation, became restless and returned back to work. In his spare time he dedicated his life to community service. In 2004, 2012 and 2020 he ran for Torrance County Commissioner was elected and most recently was finishing the second year of a four year term.

A Memorial Mass will be held at Our Lady Of Sorrows Catholic Church, Manzano, NM. on January 14, 2023 Service starts at 10:00am, Funeral mass at 11:00am, Interment at Our Lady of Sorrows Cemetery.

To send flowers to the family or plant a tree in memory of Leroy Candelaria , please visit Tribute Store

Share Your Memory of
Leroy
Upload Your Memory View All Memories
Be the first to upload a memory!
Share A Memory
Send Flowers
Plant a Tree