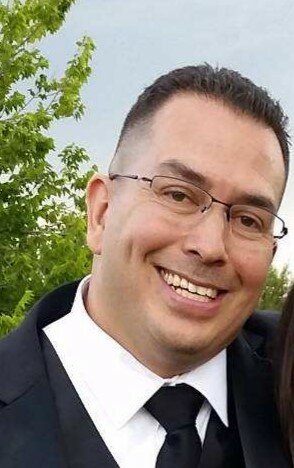 Peter G. Carriaga, a loving Father, Brother, Uncle, and Friend passed away on Sunday morning on October 31st, 2021, at age 50.

Peter was born on May 17th, 1971, in Albuquerque, NM. He loved Albuquerque and was a lifelong resident. He grew up in the North Valley side of town near Wells Park, which was his favorite part of town. He would always say he’s going to move back to the North Valley one of these days. He was very proud about the school he went to; it was Valley High School, he graduated in 1989. Peter had a huge passion for sports, both watching and playing. He played basketball all the time in his 20s and 30s with Hoop It Up 3 on 3 tournaments throughout Albuquerque. His favorite basketball team was the Los Angeles Lakers. He also played football for fun every now and then, he was a proud Dallas Cowboys fan and was always happy wear the blue and silver. He would always want to go to the park with a basketball or football and play catch. He would also like to go to the local Albuquerque Isotope baseball games, especially when it was the night the Albuquerque Dukes would play for their retro nights. His team was the Los Angeles Dodgers. He was a very huge boxing fan as well. Pete loved watching documentaries about sports, he always had them on and always thought they were very fascinating. Peter loved learning new things wherever he would go. He had a huge interest in learning old history facts about Albuquerque, he would often read old stories. Peter was a huge Clint Eastwood fan, he loved majority of his movies which he has seen several times. Along with all the Rocky movies, he loved to watch them anytime they were on. It seemed as if he looked up to both Rocky Balboa and Clint Eastwood’s characters, they were both his movie idols. He was very proud of his muscle cars that he had in his life.

Pete was a hard worker at Frito-Lay, he was there almost 20 years. He made lots of great friends, who were like family, within the company along with the customers while delivering. He got to know lots of the people from the town he loved while delivering all over the place. It seemed like everywhere he went he always knew at least one person from one place or another.

Peter always had nicknames for everyone, all his family and many of his friends. He was a very smart man; he had such an amazing memory. He remembered things from a very long time ago with lots of detail. He always had stories to tell everyone about different things that happened to him in life, or about something crazy that happened while he was out delivering. His stories will be deeply missed.

Peter had such an amazing heart, he cared and worried about everyone and was always willing to help if he could.

Peter will be deeply missed by so many.

To send flowers to the family or plant a tree in memory of Peter Carriaga, please visit Tribute Store
Saturday
29
January

Share Your Memory of
Peter
Upload Your Memory View All Memories
Be the first to upload a memory!
Share A Memory
Send Flowers
Plant a Tree