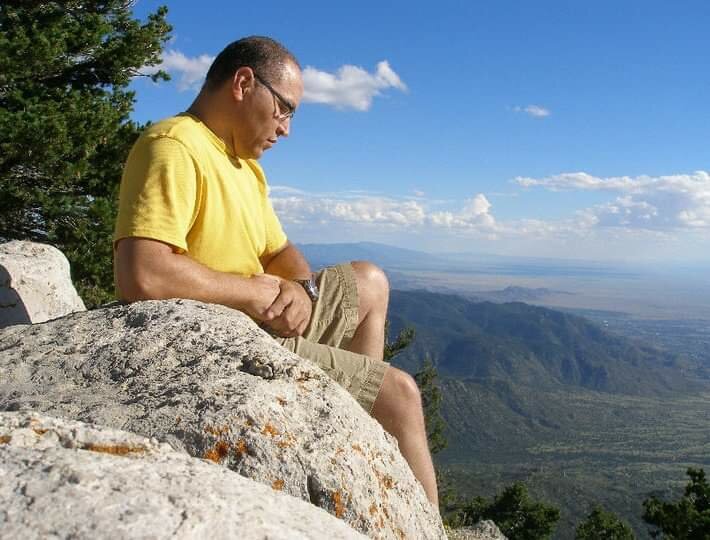 Deonis “Tony” Antoine James was born on December 15th, 1961, in Richmond, Indiana and he passed away on (Valentine’s Day) February 14th, 2022 in Albuquerque, New Mexico. Deonis had such a great head on his shoulders, and he lived quite a life. After graduating high school in 1980 from Richmond High School he joined the Air Force where he served as a Master Sergeant Flight Electronics Technician in the US and Germany.  While serving he also obtained his Bachelor's degree in Science. He worked for Intel Corp. as a Training Manager and visited many countries throughout his time there. He literally traveled the world seeing a total of 15 countries including Malaysia, China, Philippines, Ireland, Costa Rica, Spain, to name a few. After Intel, Deonis was self-employed and specialized in artistic metal/glass designs and fabrications where he made such beautiful custom works.

In 1990 he brought his daughter into the world. He stayed by her side, and comforted her while she cried. Their bond was precious and unbreakable. A lot of jokes were cracked over the years, and a lot of precious moments will be reminisced. Deonis was always trying to share all of the skills he manifested with her. He was happy to get his hands dirty to help her and he appreciated that she didn't mind hers dirty either.  Most importantly he always shared the gospel with her ensuring they would meet again. He was such a great daddy.

Daily he followed God faithfully since he was saved in his military days, he was even blessed with the opportunity of a pilgrimage to Jerusalem which he cherished so much. During his walk in faith, he constantly shared the word of God whenever an opportunity was presented. He became an ordained Minister on July 28th, 2013 and was head Pastor of Belen Missionary Baptist Church in Belen, New Mexico. Later he moved his ministry online where he saw the majority of people were.

Deonis loved dancing and music. Jazz, funk, oldies and of course gospel were among his favorite genres.  He played the saxophone, flute and a synthesizer along with his favorite songs and even freestyled his own at times. He enjoyed hiking in the mountains where he would pray at the highest points possible so he could be closer to God. Enjoying family moments, golfing, camping (fun and survival style), bicycling, shooting, riding his Harley, and teaching/sharing his knowledge with others were his favorite hobbies. His love for the world was a gift and his inspirational, passionate love for the Lord was a blessing we all got to share with him. The Lord and him became each other’s valentines as he went home on the day we celebrate love. He wouldn’t have had it any other way for God loves him most!

Deonis is greatly missed and is awaiting to reunite in paradise with his Mother :Priscilla (Tillie) Bowen, Daughter: Renata James, Stepsons: Dominique Guting and David Garcia, Grandchildren: Cyrus James and Idalia Jaramillo, Brothers: Eric James and Darren James, Sisters: Angela James, KaraLeah Asher, Aimee Harris, and Ali Rivera.  Along with Loved Aunts, Uncles, Nephews, Nieces and Cousins. He will also be remembered by his significant other Sonie Quinn, dear friends Delano Givan and Russell Clayborn and those who loved and sought him out for faithful comfort.

To send flowers to the family or plant a tree in memory of Deonis James, please visit Tribute Store
Print
Wednesday
16
March