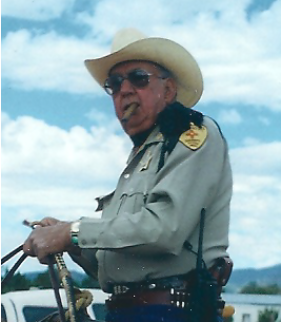 On May 4, 2022, at the age of 94, Eugene R. Long finished his journey. Gene Long had only a short distance to travel from his bit of heaven at the Lazy Cougar Ranch in the Pecos Canyon, New Mexico.

Eugene’s final days were under the loving and watchful care of his wife, Linda Long and his son Chris Long (Barbie Porter Long) with the guidance of Santa Fe Ambercare Hospice. Eugene was father of Cathy (Pietro Pertusini), Cindy (Kevin Hale), and Candy (Henry Chavez), as well as respected and loved by Linda’s sons Kraig and Kevin and families.

Eugene represented the New Mexico culture as a descendent of German, Spanish and Apache heritage and language. Nurturing of his mother Adelaida (Ida) Cortez Long, ranch life and tutelage of his grandparents Agapito and Rosita Cortez, taught him agriculture, problem solving, animal husbandry, logging, and survival. Verbal story telling passed on the culture and history. Pecos area formal education was cut short when Eugene joined the Army serving under the leadership of General George S. Patton in World War II. His combat service gained Long the rank of Master Sergeant and medals of bravery including the Battle of the Bulge action. Long continued his service duty during the Nuremburg Trials with the Military Police stockade assignment.

Eugene served the New Mexico State Police and Department of Corrections for thirty-one years. He knew the state and many New Mexicans knew him from his career. An active member and officer of the Fraternal Order of Police took him throughout the state and country. Albuquerque FOP Lodge #1 connected Eugene to wonderful friendships.

Serving as Commander of the San Miguel County Sheriff’s Posse Search and Rescue put Eugene in his element – law enforcement and riding the wilderness. He also served on local committees and worked for San Miguel County Planning and Zoning.

Someone who gave us

So much to remember.

Friends are invited to gather at the San Miguel County Sheriff’s Posse building, Hwy 63 on the south edge of the Village of Pecos on Friday, May 20, 2022, from 11AM to 3PM. There will be an opportunity to share your “Long” stories. Mailings to the Long Family can be sent to HC 74 Box 89C, Pecos, NM 87552. Donations will be directed to the San Miguel County Fire disaster.

To send flowers to the family or plant a tree in memory of Eugene Long, please visit Tribute Store

Share Your Memory of
Eugene
Upload Your Memory View All Memories
Be the first to upload a memory!
Share A Memory
Send Flowers
Plant a Tree