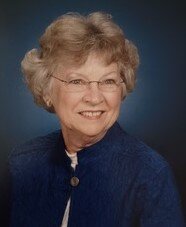 Barbara was born in Cedar Rapids, Iowa on September 2, 1934, to Elenore and Richard Spacek. In 1956 she earned a Bachelor of Education from the University of Iowa and wed F. Philip Falvey.

In 1972 the Falvey family moved from Bethesda, MD to Albuquerque, NM where they joined Our Lady of Annunciation Catholic Church. Barbara stayed at home to raise their children and then returned to the teaching field in 1981. She became a highly regarded teacher at Annunciation Catholic School for the following seventeen years. Barbara also took an opportunity to teach at Clark Air Force Base, in the Philippines, from 1986 through 1987.

She was involved in a variety of activities and led a very full and active life. Barbara enjoyed traveling, hiking in the Sandias, dancing for the Senior Center and ushering at Popejoy Hall. She volunteered at her parish as a lector, taught Catechism (CCD), and was a member of the ladies’ auxiliary. Barbara served as treasurer at Bible Study Fellowship (BSF), continued to volunteer at Birth Right and helped in the gift shop at Manzano De Sol.