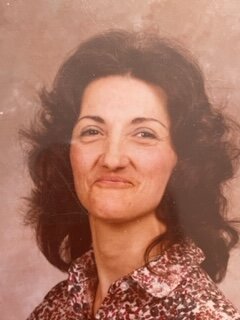 She was born January 13, 1942, to Pedro and Frances Garcia, of El Guache and was the fifth of eleven children.

Theresa was loved and will be missed by a large extended family.

Theresa was steadfast and driven in all the things she did. She was born during the polio pandemic and lived with the effects of paralysis, but never allowed it to impede her. With her disabilities she should have been cared for by others but instead she took care of all those close to her.

As a child the doctors reported that she would never walk, talk or live a normal life. She defied the odds as a child and learned to both walk and talk. She attended school, she loved to dance, and kept an immaculate home. Theresa used her stubborn streak to accomplish tasks which should have been beyond her ability. She never gave up and quietly accomplished everything she put her mind to.

She lived with Dorothy and Henry, her sister and brother in law, for fifty five years. While they may have taken care of her by providing her a home and place within their family, she in fact cared for them, their children and grandchildren. Her sweet rice, grill cheese sandwiches and chicken noodle soup made everyone recover quickly from a cold, but although she would lovingly watch over and care for everyone in the household you could not expect her to relinquish control of the TV during her daytime soaps.

She loved having a baby in the family and lovingly helped with their care. During the years of her final illness, she continued to light up and anytime they were visiting. She was an example of unconditional love, patience and kindness to her family.

She had a love for music and dancing. In her early twenties, she would go to the local dances with her brothers and cousins. In later years she continued to enjoy the music and dancing and looked forward to weddings and parties, where family would break out the instruments.

Theresa went to live with her sister Dorothy in 1968 and shared a close relationship with her younger sister. They were like two peas in a pod, only 13 months apart in age. They were fiercely loyal to one another and shared the joys and hardships of life. Theresa quietly cared for Dorothy and helped Dorothy throughout their lives and Dorothy returned the favor caring for Theresa’s needs throughout the years of her final illness. They were sisters, best friends and partners in crime.

To send flowers to the family or plant a tree in memory of Theresa Garcia, please visit Tribute Store
Friday
13
January

Share Your Memory of
Theresa
Upload Your Memory View All Memories
Be the first to upload a memory!
Share A Memory
Send Flowers
Plant a Tree